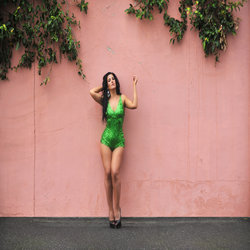 Known for her non-traditional interpretation of soul, blues and jazz, Zoe K’s forthcoming second album 'It’s Just What I Like' is brimming with Zoe’s vivacious personality. Recorded in both New Orleans and Melbourne, with an array of local and international musicians including collaborations with artists such as Mike Bass (Trombone Shorty) and Ray Angry (The Roots).

Zoe K is a powerful force on the Australian music scene with a remarkable voice that pays tribute to the bygone greats of soul, jazz and blues. Zoe K’s new offering is sure to be a welcome dose of old school substance and style in Australia's already rich, musical landscape.

Zoe K rose to prominence after being awarded 1233 ABC female vocalist of the year (2010) and went to perform at Woodford Festival as well as supporting an array of touring artists such as Jon Cleary for his Blues fest sideshows, Imelda May, and Australia’s queen of soul Renee Geyer

Since being based in New Orleans, Zoe has also been a featured vocalist for trumpeter and HBO Treme star Kermit Ruffins. Zoe K has also supported her all time favorite artist, Grammy Award winner Jon Cleary for his sold out Blues Fest Sideshows.


This track features Mister Goldfinger aka Ray Angry who performs along side The Roots. The track is a crossover of soul meets a little bit of smooth jazz, written after a failed attempt of eye connect with a stranger on a Melbourne tram, Zoe wants us to put the phone down and notice her!