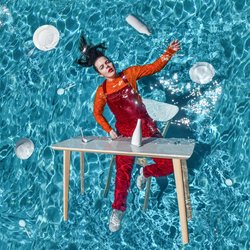 While living in WA, a chance encounter with her next-door neighbour, producer Camikaze resulted in her first release where she featured on his track Shadows. Shadows features Zoe’s signature pop vocals and has catapulted to a million plays on youtube and Spotify.

In 2018 Zoe released her debut single; another collaboration with Melbourne future bass producer Staygo. ‘Bury It’ Zoe A’dore’ impressed as a debut having received 1.9 million plays on Spotify alone and support from triple j, triple j unearthed, Project U, and Futuremag Music after a premiere on Pilerats. Bury It appeared on 12, 300 user generated playlists as well as spotify’s New Music Friday Au and NZ, We be Vibin, Happy Pop, Friday Funday, Get Popped, Singled Out, New Pop Sounds and more.

Zoe has studied Audio Engineering at SAE to dip her toes into production and attended the prestigious Nandos Music Exchange at Roundhouse Studios in London. 2019 looks to be a big year for Zoe A’dore who has several songwriting and vocal features ready to be released alongside her new single ‘Galaxy’ written with Gyspy and the Cat’s, Lionel Towers.


When you find someone and everything seems to make sense. It’s the profound feeling that you can be completely yourself and there’s no limitations with them. You’re now part of this whole new world and it’s a safe space. It’s not that you can’t obtain that happiness as an individual, but more so there’s another person enhancing your amazing qualities.