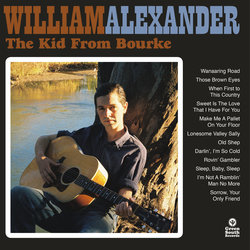 
Wanaaring Road, the first single from William's latest album is a tale of his love for his birthplace Bourke. Pure vocal and acoustic guitar, recorded live to a single microphone and recorded straight to tape.

Other tracks by William Alexander: Sweet Is the Love That I Have For You  -  I'm Not a Ramblin' Man No More
%