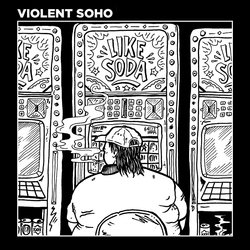 In September 2013, the four childhood friends from Violent Soho unleashed their third studio album Hungry Ghost upon the world and in doing so, set off a chain of events that no one could have predicted. Debuting at #6 on the ARIA charts and remaining in the top 50 for over a year, Hungry Ghost seemingly became a favourite among hoards of punters.

It was this reaction that saw the band spend 2014/15 constantly touring on their own sold out headline tours and festivals like Splendour in the Grass, Groovin The Moo, triple j’s ‘One Night Stand’, Big Day Out, Falls Festival, signing deals with influential record companies SideOneDummy (US/Mexico) and Dine Alone (CAN), featuring in the top 15 of the Hottest 100, receiving the ‘Album of the Year’ and ‘Rock Album of the Year’ awards at the 2014 AIR Awards.

With all of the above under their belts, Violent Soho re-entered The Shed studios in Brisbane with producer Bryce Moorhead around mid August and began recording their fourth album.


‘Like Soda’ opens with little fanfare, simply Luke Boerdam and his guitar. As the song builds, the rest of Violent Soho aren’t far behind and come steamrolling in at the one minute mark as the track explodes into all out chaos and fury.