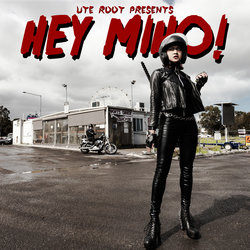 One of Melbourne's brashest live bands has done something unexpected in 2019: they've gone quiet. After hitching a ride on tour with the Cosmic Psychos after the release of 'Ketamine Queen’, UTE ROOT went bush and paid a visit to Knighty's farm for some "mentorship." Beers were sank, responsibilities shirked, and the song 'Hey Miho' was written in a sweaty shed on a blistering 40-degree day, surrounded by gym equipment, a broken KISS CD and vintage Psychos memorabilia.

A mutual love of chaos and cinema led to the conception of a fictional grindhouse movie trailer, and thus the clip for the single was born. Conceived, written, and produced by the band themselves, UTE ROOT have raised (or lowered) the bar for all clips to come. With all the trappings of a lost Tarantino flick, the raw edges of 'Repo Man' and the hammy camp of ‘Class of 84', 'Hey Miho' is likely to blow your face right off.

The song itself captures the true live intensity of the band, a ripping Motörhead-flavoured banger built for speed, not comfort. It's a red hot fuel-injected nightmare-ride on a road to nowhere, and you'd better hold on to your ASS!


Brand new single from Melbourne junk punks, UTE ROOT. Hey Miho is the first and fiery taste of a bunch of tracks written while staying at Spring Plains, the farm/home of the Aussie Punk Rock Icon, Ross Knight of the Cosmic Psychos. Film Clip written and shot by UTE ROOT.