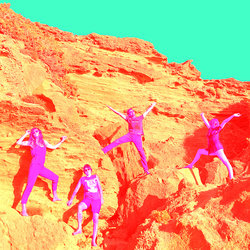 Braindrops is the follow up album from Tropical Fu*k Storm's 2018 debut A Laughing Death In Meatspace and similarly, written and recorded in the bands home 'Dodgy Brothers Studio' in regional Victoria.

Braindrops overflows with compelling sounds and visions that reflect the often dark and fractured reality of life on planet Earth as we hurtle toward environmental and social decay at a frighteningly rapid clip.

Tropical Fu*k Storm have achieved a uniquely off-kilter sound on Braindrops. Liddiard partly credits this to the group’s use of unconventional equipment, “We use lots of techno gear to make rock and roll because rock and roll gear is boring, and all sounds like Led Zeppelin.”

A recurring theme on Braindrops concerns the various ways the human brain can be manipulated and controlled for exploitative gain.

Braindrops is an unrelenting work, from an unrelenting musical ensemble. “Tropical Fu*k Storm is a full-on thing,” Liddiard offers. “Everything we do, we do it to death.”


“Who’s My Eugene?” contemplates a more personal example of predatory mind control. “It's about Eugene Landy, the doctor that drugged the sh*t out of Brian Wilson and emptied his bank account"