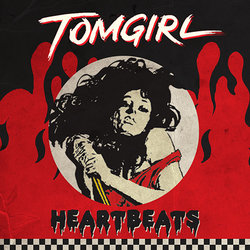 The world of Tomgirl may thrive on noir, but it’s the playful juxtaposition of color that brings a balanced visual aesthetic that captivates.

Cherie, ever the musical chameleon first picked up the guitar when she was 15. By the time she was 21 she was sharing festival bills with the likes of Franz Ferdinand and Tegan & Sara at Malaysia’s Urbanscapes Music Festival. She later went on to also make an appearance at Primavera Festival in Barcelona.

After a serendipitous meeting at Laneway Music Festival, Cherie and Ted discovered a shared musical interest in 60’s garage rock and 90’s shoegaze and decided to form Tomgirl , a project that harks back to the old days when the music was brash, primitive and visceral.

‘Heartbeats’, second single from TOMGIRL’s self-titled LP is out now. With soft chimes atop fuzzy guitars and a driving bass line, images of a bubble-gum chewing siren’s encounter with a leather jacket-clad bad boy introduce the first sparks between lovers from different sides of the tracks. Like the fluctuating heartbeats of the protagonists, the listener is taken through shifting paces in the songs that follow as the romance unfolds and cracks begin to surface.


‘Heartbeats’, second single from TOMGIRL’s self-titled LP. ‘Heartbeats’ lulls listeners into a flirtatious garage pop number on the confusing, exciting sensations of a crime world romance on the skids.