Amrap's AirIt | Australian Music Radio Airplay Project :: Rock :: The Vacationists - It Could Be Much, Much Worse

The Vacationists - It Could Be Much, Much Worse 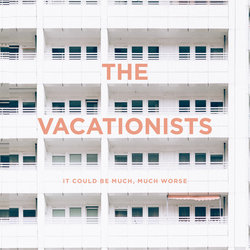 The Vacationists like to create a bit of a party wave on the dance floor. They call Sydney’s inner west home but their shimmery indie-pop sound hails from all over the world.

Among them are a Swede, an American, and a few Aussies with Colombian and Thai heritage, who come together to tell stories of naive love and heartbreak. Their previous releases have taken them from Kensington to the Moon. Next on the horizon for The Vacationists is their debut album, Coney Island.

The band released their debut single Smile, You’re in Kensington at the end of 2014 — it received steady indie radio play, and has helped them build a strong local reputation. Their live performances are loud and fun and they are bringing their show to Brighton Up Bar on May 21st for the launch of their new single, It Could Be Much, Much Worse.

With a common love for Phil Spector, Talking Heads, The Smiths and Lou Reed— their songs are sure to bring a smile to the lip, and a boogie to the hip.


A bouncy indie-pop tune with a playful song structure. It tells the story of finally letting go through layers of shimmery guitars and keyboards — imagine The Smiths and The Jesus and Mary Chain writing a song on a bender after an early 90s hiphop gig.