Amrap's AirIt | Australian Music Radio Airplay Project :: Rock :: The Post - Did I Say too Much 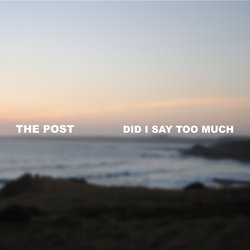 The Post are a three piece Punk/Rock band from Melbourne, Vic. All previously playing in other similar bands, The Post Formed in early 2014 They quickly got to work writing a number of tracks and jumped into the studio to record their first 5 track EP 'Bodies'.
Bodies was recorded at Sing Sing South studios with Matt Voigt, who has worked with the likes of The Smith Street Band and Big Scary. Bodies was later released in October 2014.
After the release of 'Bodies' They quickly jumped onto the Melbourne gig scene playing regularly around Melbourne and a few rural areas.
Recently The Post has just gotten out the studio from recording their second release 'Did I Say Too Much?', which was also recorded at Sing Sing south with Matt Voigt. Did I Say Too Much features 3 tracks including the single Did I Say Too Much?, Easy Way Out and Bodies(Acoustic).
Through August The post will be doing a number of shows to launch their new material, starting with their single launch on the 31st of July at the reverence Hotel in Footscray. Other places they will be playing include Adelaide, Phillip island, Bendigo, Shepparton and Sydney.


'Did I Say too Much' was recorded at Melbourne's Sing Sing studios. Engineered by Matt Voigt (Big Scary, The Smith Street Band). First single from an upcoming 7inch