The Packets - Surrounded By D**kheads 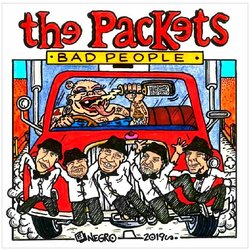 Formed in Adelaide in 1997 then moved to the Gold Coast in 2001 eventually moving back to Adelaide in 2010 where they continue to spread their tormented songs of joy today.

They have played with many bands including, Cosmic Psychos, The Grates, Eskimo Joe, Anti-Nowhere League and also toured with Regurgitator and Magic Dirt.

The band’s sixth studio release ‘Bad People’ came out on the 15th of November 2019. Recorded by Evan James at Twin Earth Studios, with Cover Art by Melbourne punk/cartoonist/satirist Fred Negro. It's their sixth recording, a 7 track mini-album which plays in some ways like a concept album loaded with angst, frustration and resentment and of course the underlying sense of humour they are known for.

“Snotty punk mixed with pop style hooks, the ‘Bad People’ release is a collection of 7 well written comedic punk songs with pop elements that make them catchy, each track features something special giving them all a sense of originality”. - Michael Wilson – CRANNK Magazine.


Love them or hate them, d**kheads play a major role in modern society.

In this highly relatable, catchy, quirky number The Packets investigate the bitter sweet relationship mankind has developed with d**kheads and the impact they have made on our way of life!