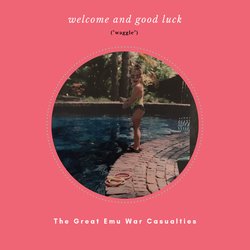 The Great Emu War Casualties was born in 2017 on the other side of the world in the UK, Liverpool, where bassist Saskia met frontman Joe and sound enthusiast Elliott. Saskia’s time in the UK inevitably drew to a close, and when Elliott parted ways on a boat, both she and Joe continued the band briefly in the Netherlands before running out of money and deciding to settle in Saskia’s home country in Melbourne. It was here that they met and joined forces with Maxi ‘Maximilliano’ Maxwel and famous Nepali metal lord Bibek ‘B-bek’ Tamang.

The band, whose tracks are regularly described as quirky, eclectic and eccentric, are really just a pop group who cite Talking Heads, The Killers, Unknown Mortal Orchestra, Everything Everything and John Grant among their main influences. In the year that they’ve been in Australia they have played incessantly, headlining Oxford Arts Factory and The Factory Theatre in Sydney and hosting residencies at The Evelyn and The Tote in Melbourne. They released three EPs in 2018 with Aardvark Records in the UK and are planning to release three singles independently this year, with the first single launch at The Bergy Seltzer on August 10th.


The track is your classic bright, indie pop/rock, reminiscent of The Wombats, Arctic Monkeys and Two Door Cinema Club, and is the perfect hark back to summer.