Team Utopia - Calling Out To The Masses - Internet Download 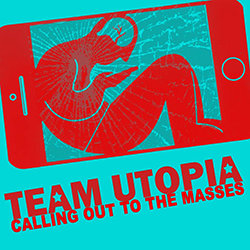 Team Utopia was born in the mind and heart of Redcliffe native Nebe back in 2011 and has seen some impressive musicians pass through its ranks. Most notably, legendary guitarist Bob Spencer (ex-Skyhooks, Angels), who played with the band for much of last year.

The band has shared stages with acts as diverse as Richie Ramone – drummer with the legendary Ramones! – and New Zealand’s Bonjah. They have played alongside local heroes The Radiators and Mental As Anything.

Calling Out To The Masses is a song about our need to stick by each other to try and facilitate change in this increasingly chaotic world. That’s something Team Utopia have tried to do in their own small way on a local level with their commitment to the annual Redcliffe-based funds and awareness-raising benefit concert, Rockin’ 4 The Homeless, over the past five years.


A second rocking tune from this Brisbane band, featuring Bob Spencers iconic guitar and a great message in the lyrics. This song rocks along right from the start, big drums, bass and electric guitar but with a contemporary modern rock flavour.