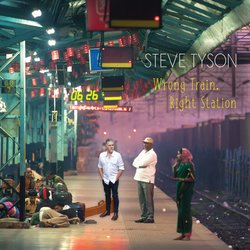 Byron Bay songwriter Steve Tyson does darkness very well with regret-tinged songs of missed chances and jealous-rage murder tales, but on his third solo album 'Wrong Train Right Station', he balances these with songs with a twinkle in the eye or tongue in cheek.

Tyson has not had the same profile as other chroniclers of the Australian experience like Shane Howard or John Schumann, but the tracks on this new record reveal a master song craftsman with a nuanced lyrical touch and strong melodies.

Although best known for his work with Brisbane folk-rock band Rough Red, Tyson has released two critically acclaimed solo albums prior to this new release, both scoring 4 star reviews in the national music press.
On this new set, his gruff voice and superb guitar work - he plays every note on this album - suit his songwriting style well.

Wrong Strain Right Station shows Tyson at his poignant best, but there is always plenty of grit in the musical delivery here. Nothing is over-polished, but these are songs that are built to last.
Tyson tours the album with his band The Train Rex, with dates from late September to late November.

Other tracks by Steve Tyson: Dance With The Dutch Girl  -  Cavvanbah
%