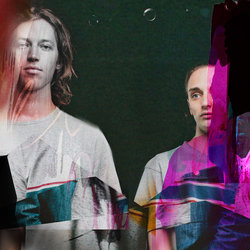 Behind the buzz and mystique of Slum Sociable are long-term friends Edward Quinn and Miller Upchurch.

The duo make lo-fo (not a typo) jazz hop, music born in Melbourne with truly global appeal. There’s no blueprint to their sound, just many elements – part jazz, part hip-hop, part trip-hop, part acoustic electronica – all cut up and bent into something unique to its Melbourne setting. It’s a fresh of breath air.

The duo's debut album TQ's, released in late 2015, seductive charm saw Slum Sociable cut through internationally, gracing the Top 5 of the Hype Machine charts, popping up on a host of Spotify playlists and receiving love from global radio station Beats 1, along with BBC Radio 1 and KCRW. It also saw them release a single via tastemaker label Kitsune and tour globally: playing a string of headline dates in the UK and US on top of sold-out shows back home. This year, the band performed at coveted Australian festivals Laneway and Splendour in the Grass.

Slum Sociable are currently placing the finishing touches to their debut album, due for release in early 2017.


‘Name Call’ is the first cut from the subversive duo’s awaited debut album and adds to their already impressive repertoire, which includes single ‘Anyway’, and ‘Apartment’ from debut EP, TQ. It takes a firm hold on the hips and guides left to right to left in a hypnotic sway.