Shotgun Mistress - No Friend Of Mine 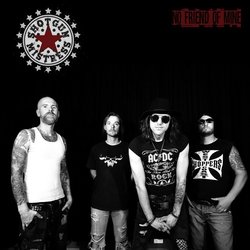 Matt has been the metal axe brain behind acts such as Ackercocke, The Bezerker and Abremelin and has also made it to the top 100 greatest metal guitarists according to the well known UK Author Joel McIver. (The best-known of his books is the best-selling Justice For All: The Truth About Metallica)

Banded together in late 2018 alongside Sub Rosa & Mr Stitcher dummer David Lee the two began writing music for a new rock act with influences in the vein of Alterbridge, Velvet Revolver, Slash & Motley Crue to name a few.

Now set to take the stage and begin performing from June whilst recording the album, the band works hard at putting together a live performance and a myriad of online and radio promotions ready for the coming months.


THE RESURGENCE OF ROCK
Melbourne based rock band Shotgun Mistress introduces you to the resurgence of rock. The single boasts that classic sleazy roots of rock & roll that a lot of us have seemingly left behind along with their trusty pair of worn in chucks, guitar solo's and silk scarfs still attached to weathered mic stands.