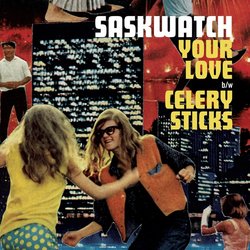 Taking cues from legends like James and Aretha, as well as New York’s bangin’ modern soul scene; Saskwatch smash out their inimitable live show, hard, rough and tight - just like the old days. Leading the pack is singer Nkechi Anele, who will take you from the depths of heartache to overwhelming joy in just one night.

2012 has already been an enormous year playing at Golden Plains Sixxx and Lorne’s Falls Festival, support slots for soul legends Earth, Wind and Fire and Maceo Parker, overflowing residencies at Cherry Bar’s soul night and the completion of their debut album (slated for an August release).


The follow-up to 2011’s acclaimed mellow soul cut ‘Don’t Wanna Try’, ‘Your Love’ is a sweet soul anthem, a sentimental celebration of new love.‘Your Love’ is also the second single to be lifted from Saskwatch’s upcoming debut long-player Leave It All Behind due out this August.