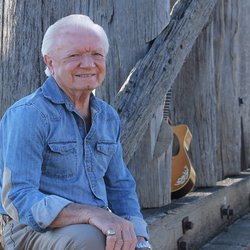 Rex Dallas first appeared on local radio at the age of 15 but a year later, relocated to Sydney. His appearance on Australia’s Amateur Hour led to him becoming a regular on 2SM’s On The Trail And Hall Shows for the next three years. He later toured with Lee Gordon and made his first recordings for EMI Records in the early 60s, his first single being ‘Bicycle Wreck’.

His versatility has seen him perform material varying from country to rock ‘n’ roll and even light operetta. Like many Australian artists, he is a very fine yodeller, being so especially devoted to Harry Torrani that in 1975, he recorded an album of Torrani songs.

Rex holds the distinction of being the first artist ever to take the title from constant winners Slim Dusty or Reg Lindsay, when he was voted Best Male Vocalist at Tamworth in 1976.


'Kitchen Table' is a true story written by Rex Dallas and Stan Coster's Granddaughter Aileen Manicaros. The big table, with legs as big as kegs, was lugged out from Scotland by Aileen's Great Granny. The big table became part of the Coster family heritage. Many happy hours, with family and friends, were spent at the old kitchen table.