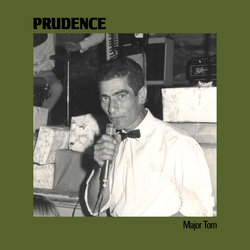 With his debut release, Major Tom, Prudence (the moniker of Tom Crandles - Au.Ra) lays down his own idiosyncratic vision, a strange journey into a certain world that can only be known as Prudence’s. He composes songs that feel electric yet effortless; a natural disaster of frenzied noise fused with soul-quenching lyrics and themes.

Prudence’s Major Tom has its roots firmly planted in reality. From opening cut, “Smile & Nod” Prudence’s winning blend of careful precision and mercurial abandon will encompass you. In the self-protection of “Euphoria”, the tenderness of “Caramel”, the resentment of “Save It For Me”, he draws on his own story, capturing the vagaries of relationships we’ve all been through: the joy, ache, uncertainty, and bitterness.

Major Tom was recorded by Prudence alone in Margate, Kent on a whim while he took a break from the London rat-race. Though the project wasn’t fully realised until it was completed back in his base of Sydney and mixed in Auckland in early 2019.

Delicate and bold, tender and searing, the six tracks on Major Tom are an amalgamation of all things holy and sinister.

Major Tom is out May 10 on Forged Artifacts.


“‘Smile & Nod’ is a song that was planted with a bassline that quickly grew into a pulsating pop song about the overwhelming lure of some of life’s vices.”