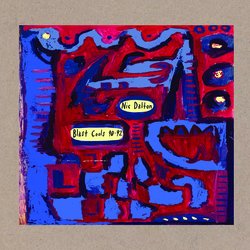 Blast Cools is the third instalment of four-track recordings from Nic Dalton. These thirteen songs from early 1990 to March 1992 are all previously unreleased (except for home mixes of “Lost Four Days” and “King of My Feelings” which appeared on the Booth Tape cassette). At the time Nic was in the Plunderers, who were experimenting with psychedelic pop and that can be heard on a lot of these songs, especially “Red Electric Noodle”, “Flat Lemonade” and “Blast Cools”.

Apart from Smudge/Godstar drummer Alison Galloway on three songs (including a faster version of “Way Out Jim”), Nic plays all the instruments himself. In May 1992, Nic left Australia to join Boston band Lemonheads and his routine of four-track recording his latest batch of songs pretty much ended, with only sporadic sessions taking place from then to now. The painting on the front cover was chosen specifically for this reason – it was done the night before he left Australia in May 1992.


This song sat forgoten - unmixed and unnamed - for 27 years until October 2018. It's a sprawling, six minute psychedelic trip that shows where Nic was at in the early 90s when the Plunderers were experimenting with similar soundscapes.