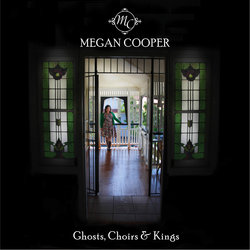 2013 QMA finalist, Cooper has been steadily establishing a presence for herself, while her debut EP North has also proved to be a winner receiving great airplay across the country. Her forthcoming studio album, Ghost Choirs & Kings, sees Cooper working once more with Michael Muchow in producing a debut record that accurately represents the creative and unique nature of Cooper’s music and how she has developed as a performer.
The thirteen track debut is full of heart, a great observation of the musical spectrum that is country music and its surrounding strands and most of all, it’s a memorable record for an artist with a sound like Cooper’s.
The impressive marriage between melody and vocal quality is immediately evident when listening to Ghost Choirs & Kings and those who have been following Cooper on her journey will find this album comfortably familiar, though a progression does not go unnoticed. Cooper has chosen the right time for a wider audience to become introduced to her – take Ghost Choirs & Kings into the summer with you and let the blues-soaked country music work its way in and take you under as it did Cooper.