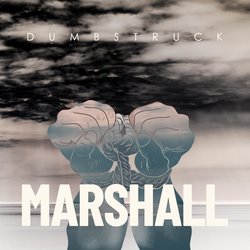 The band is fronted by singer/songwriter Shaun Marshall, who has been writing music since the ripe age of 13. Shaun has played in a plethora of bands across the UK and Australia, and has an extremely diverse musical resume.

MARSHALL released their single and music video called ‘Strive And Repair’ in 2018.

The single was the first offering from the band’s forthcoming EP ‘A Thousand Years High’ (set for release on Feb 28th.)

The EP is an epic and progressive collection of heavy rock songs that was produced by Ben Kerswell and Allan Lahey.

The band will be playing an EP launch show on Friday 28th February at The Milk Factory in Brisbane.

MARSHALL have just released their new single ‘DumbStruck’ (available for download on all major online stores.)


DumbStruck opens with electric guitar that is accompanied by beautifully arranged strings and builds up to a hard-hitting rock progression. Vocalist Shaun Marshall instantly shines on this track, with vocals that are comparable to Chris Cornell. The song has a very strong chorus that won't leave you for days. Perfectly crafted rock music from top to bottom.