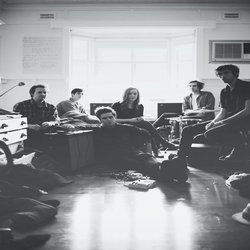 Love Migrate is fronted by Eddie Alexander whose lyricism is raw, emotional, confronting and genuinely riveting. Sonically the band creates soundscapes that flow seamlessly between soaring melodies and soft instrumental breakdowns – like a lost soundtrack to a Terrence Malick film. In a live setting the instrumentation is comprised of three guitars, one electric organ, one pump organ, bass, harmonica and drums which marry together in a mesmerising way.

In August 2011 Love Migrate were the featured artist on Triple J unearthed on the strength of one song. In December they supported Matt Corby for three nights at his sold out Melbourne shows to stunned audiences. A recent appearance at Boogie Festival in Tallarook was praised as being a mid afternoon highlight.

Paul Maybury (King Gizzard and the Lizard Wizard) and Casey Rice (The Dirty Three) have added the finishing touches to the band’s debut album ‘Plagued Are All My Thoughts, Like White Ants In The Fence’ will be released through new Melbourne imprint Flightless on October 12.