Lanie Lane - What Do I Do 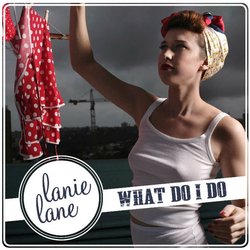 Pinpointing exactly where Lanie Lane (pronounced "Lanny") is coming from musically is not easy, but take a hotpot of Blues, Jazz, Pop & Country from golden eras of the 30’s, 40’s & 50’s, place them firmly into a modern context, and you’ve got a good a starting point. Hers is a voice that makes an immediate impact - it’s distinctive, and incredibly expressive.

Lanie has recently gained attention as the voice accompanying Mr. Tim Rogers on You Am I’s recent single, “Trigger Finger”, as well as appearing in the superb accompanying video. In addition, the past 12 months have seen her appear as a featured artist on Triple J’s Unearthed, sing with Lisa Mitchell at this years’ Splendour In The Grass festival, be joined on stage by Julia Stone, and perform her own sold out shows at the 2010 Adelaide Cabaret Festival. Having spent the past 18 months writing songs, collaborating, playing holes in the wall, public houses, festivals, theatres and all points between, Lanie embarks upon her first national tour with Jez Mead throughout November and December.


Lanie’s debut single “What Do I Do” is an ode to the necessary evils of dead end jobs supporting loftier ambitions. It arrives on the back of a sack of coins and a double bass line that heralds in THAT voice, it's part chant, part stomp, part stripped back anthem.