Jane Walker - Do It With Love 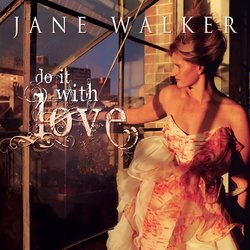 From Sydney to New York, London to Byron Bay, a buzz is building among the stellar cast of local and overseas talent who feature alongside Jane Walker on her debut album, Walk Gently.
Recorded in two sessions by UK producer Steve James and Sony producer Barbara Griffin the songs on Walk Gently speak of love, longing and a universal search for identity and the music is energised with a potent mix of textures and influences.

Trained in classical and jazz disciplines at the NSW Conservatorium of Music, Jane sang for two years with Sydney a cappella outfit The Café of the Gates of Salvation. She later travelled to Africa and made her first recordings with the legendary Thomas Mapfumo’s band, The Blacks Unlimited. While writing and performing in London, her track ‘Threadneedle Street’, produced by English DJ-composer Pete Lazonby, was featured alongside Massive Attack and Radiohead on the album Foundations: Coming up from the Streets. More recently, another track from Jane’s forthcoming album, All Acts of Love, has been selected for inclusion on the Groove Operator compilation CD being released in 2011 by Universal Music in Poland.

Walk Gently will be released to stores and iTunes 2 May 2011.


Do It With Love is an infectious feel good song capturing the idea that while material things are nice, what counts is how we treat each other. The song showcases Jane's signature sound that has been described as an uplifting cocktail of chillout pop.

Other tracks by Jane Walker: Take A Chance
%