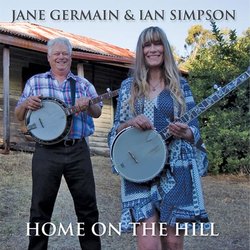 Jane and Ian have been playing their style of acoustic music together now for several years and first teamed up for Jane’s Chinese Whispers, and then released their first duo album Lonesome Road, followed with No Fun Allowed – (Listen to What You Know, from this album, was awarded 2016 Tasmanian Composer’s Festival - Song of the Year.)
The duo had the honour of representing Australia at the World Expo in China. They were also awarded WA Country Music Award for Best Vocal Group or Duo for four consecutive years.

Home on the Hill contains songs written about Jane’s travels in Tasmania. Songs such as The Girl From Daisy Dell - the story of a girl who was murdered near Cradle Mountain; Too Much is Not Enough - a song of fun, lust and longing; the title track, Home on the Hill - describing life on the East Coast, with it's beautiful beaches, wineries, and penguins!


Home on the Hill - describes life on the East Coast of Tasmania, with it's beautiful beaches, wineries, and penguins! Jane plays acoustic guitar on this track, Ian on dobro. Also includes guest harmonica player, Norm Leslie.


Other tracks by Jane Germain & Ian Simpson: Too Much is Not Enough  -  Little Red Bird
%