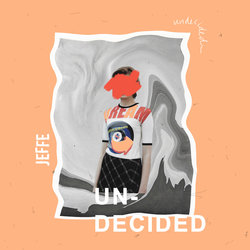 Announced to perform at BIGSOUND 2018 in addition to appearing as special guest for No Mono this August and September, JEFFE today unveils her dreamy yet electrifying new single Undecided. Where her dreamy debut Whoever You Love, I’m Cool ascended gently from the depths, Undecided is its flickering, moody sister, caught between spilling onto the dancefloor and shutting away in a bedroom.

Landing ‘Newcomer of the Week’ on Hype-machine listed Highclouds, JEFFE’s debut landed with support from radio and an addition to prestigious Spotify US playlist Fresh Finds. She’s also covered Problems by internationally celebrated french producer Petit Biscuit on a remix package released on his label Believe.

JEFFE has spent delicate time fleshing out her artistic vision. Growing organically from a chance meeting with Undecided's producer Dave Hammer in 2016, the pair have unlocked a unique and raw electronic sound.

JEFFE creates pure magic on stage and has already performed at an impressive list of festivals including Groovin the Moo, Secret Garden Festival, Mountain Goat and Rare Finds, as well as supporting Stella Donnelly, G Flip, Alex The Astronaut and LANKS. Back in the country after performing in the UK, JEFFE is sure to be a BIGSOUND highlight.


The second single from JEFFE doesn’t so much play as shudder. Where her dreamy debut ‘Whoever You Love’ ascended gently from the depths, ‘Undecided’ is its flickering, moody sister, caught between spilling onto the dancefloor and shutting away in a bedroom. “Where’s my heart at?” sings JEFFE, sounding caught in a the small, nervous and neon-tinged world.