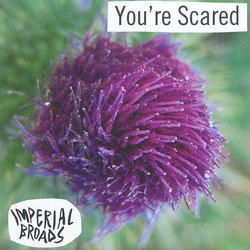 Say hello to Sydney's newest rock royalty, Inner West garage-pop insurrectionists Imperial Broads, who formed as three guitar-wielding gals in a garage in Marrickville during a freezing winter a little under two years ago, with designs on creating rambunctious New York punk rhythms while they learnt their instruments along the way.

An egalitarian set-up from the get-go, sharing songwriting and frontwoman duties between Lauren Crew (Belles Will Ring), Eve Lande and Pip Smith, the trio quickly realised they needed a drummer to make their band less Marine Girls and more The Saints. Enter honorary Broad Nick Kennedy (Knievel), ready to go nuts on the tubs while the three-prong vocalists had a lot of fun out front.

The Broads swiftly honed their own brand of sugar-rush punk and throwback garage-thrash through a slew of gigs alongside everyone from Melodie Nelson to Rainbow Chan, These New South Whales to Sounds Like Sunset. Renowned For Sound raved one of their subsequent live shows packed "a powerful set of tunes that saw doo-wop pop and punk collide".

Teaming up with producer Liam Judson (also from Belles Will Ring), their debut album "Who Are We Turning Into?" is released on 4th November.


Pip says '"You're Scared" was written from a place of sexual frustration. At the time I was also bored by the coy expression of female sexuality in the music I liked. I wanted to flip the predator/pursued power relationship and get people dancing at the same time."