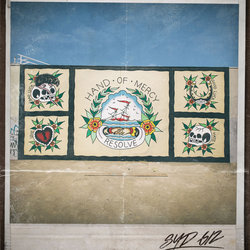 HAND OF MERCY will release their new album Resolve on October 31 via UNFD. Resolve is the first album to feature the vocals of Nick Bellringer, who replaced original vocalist Scott Bird in June.
In 2012, they released their UNFD debut Last Lights, which took the band to new heights around the world. The album debuted at #44 on the ARIA Charts, and saw the band tour throughout Australia, Europe and the UK for two years straight, putting together a loyal fan base across the world.

Resolve was recorded in Boston in late 2013, but its release was delayed when they parted ways with Bird. Flying in was Brisbane native Nick Bellringer, who immediately added a new energy and attitude to their music. Bellringer had a trial by fire upon joining - first touring with Deez Nuts on the Rampage Tour, before heading to Brisbane to record his vocals with Troy Brady from The Amity Affliction. From there,HAND OF MERCY played sold out shows with Architects and will now head out on the massive Resolve Tour in November.


Axis is dark. It is heavy and definitely not for the faint hearted.
"In a world where we're all born to choose
A life to win. A life to loose
I have faith in no one
or nothing else
Just the belief
In myself"