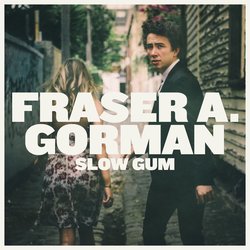 Add to that the fact he’s an active part of the small but amazing DIY collective Milk! Records (run by Barnett and Jen Cloher) and the endorsements of his skill as a writer and musician are ringing loud all over the world. Now, Fraser Alexander Gorman’s collection of cool-as-fuck, funny, heartfelt and super-infectious tunes has come to fruition on his debut album titled ‘SlowGum’ (released June 2015 through Marathon/ Milk! Records).

His live shows have grown in a short time from intimate to majestic. Fraser’s built an enviable support-slot CV over the past year featuring such diverse yet prestigious names as Damon Albarn, Wanda Jackson, Guy Clark Jr, Justin Townes Earle, CW Stoneking, and his buddies You Am I.


Fraser's favourite song on the record. A story about wandering home from Old Bar on Johnson street in Fitzroy (after a few sherberts) to Lambs on Brunswick street.

Other tracks by Fraser A. Gorman: Shiny Gun  -  We're All Allright
%