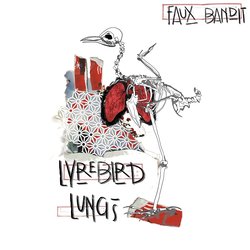 Since their debut EP was released in 2015, Faux Bandit have consistently composed gritty, raw and tight rock that has been perpetually praised and approved by representatives throughout various corners of the music media.

In their sinister fashion, these bandits continue with their polemic blasts on various touchy subjects, themes and social behaviours. This attitude has shone through in their two previous singles ‘Kill The Comedown Bug’ off their sophomore EP (January 2017), later followed by the single ‘Every Man Is A Pyramid Scheme’ (November 2017).

"This song's a sweaty mess. Oh wait, that’s me after rocking out hard to this tune.” (Dom Alessio, Triple J)

“Gritty raw choruses and chunky riffs; it’s hard to believe this is the work of a two-piece” (theMusic)

“A cocktail of raw vox and slinky riffs, hammered into a groove” (ToneDeaf)

Now, toeing the line between passionate animosity and a complete catharsis, is their new single ‘Lyrebird Lungs’, launching at Brisbane's Bearded Lady, June 9.

Faux Bandit have big plans for the rest of 2018, for the time being you can get amongst this new single and their rocking back-catalogue that has been growing since 2015.


Toeing the line between passionate animosity and a complete catharsis, ‘Lyrebird Lungs’ grooves throughout the punchy, percussive lyrics in the verses into the heavy outbursts in the choruses and concludes in an erupting rampage. The result is a violent mess that you want to re-live again and again.