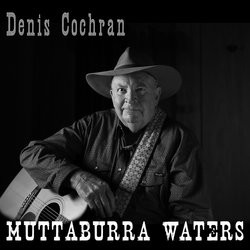 Born between two world wars, Denis was raised in western Queensland on a cattle station near the tiny town of Muttaburra, home of the famous Muttaburrasaurus.

Growing up with a love of the bush and real fondness for country music, Denis is a renowned singer of country songs in Brisbane where he lives with his wife Lorraine.

He describes his youth and young adulthood in outback Queensland with a great affection for nature. He loves the great varieties of flora and fauna in inland Australia and the natural, episodic changes of the seasons. He has a profound interest in the wellbeing of country folk whose livelihoods are dependent on good rainfall, which in many parts of rural Queensland is all too rare.

Because life in the bush relies on the availability of fresh water, he was driven to write his stirring ballad “Muttaburra Waters” about much needed rain after a long drought. He dedicates his song to struggling western farmers.

Now retired in Brisbane, Denis plays his song and many others as a busker on city streets. He’s delighted that his music brings pleasure to passers­-by, whose contributions help to put bread and butter on the table.


“Muttaburra Waters” describes the arrival of much needed rain after harsh drought in the outback. Western creeks overflow before converging into flooding rivers that carry Queensland water thousands of miles south to a very different part of the country - the commonly dry salt pan, Lake Eyre in South Australia.