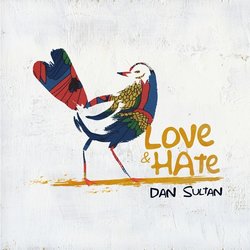 Last week, Sultan popped into The Music to perform a live rendition of ‘Look At Miss Ohio’ as a precursor to the album’s announcement this week.

2019 has seen the return of a newly invigorated Sultan after a year of self-assessment and recalibration the year prior, with the Aviary Takes album and upcoming tour marking his return to the spotlight in the best way possible.

The tour launches this weekend in Hepburn Springs, taking in Metro and regional locations across 20 dates, finally winding up in Port Macquarie on May 11. Fans can expect to see Sultan armed with a guitar, a keyboard and a fresh batch of anecdotes and ‘dad jokes’. Tickets are on-sale now.

The Aviary Takes album will be released on March 15. Fans will adore this stripped back collection of classics that allows Sultan’s charming vocals to shine.


Melbourne singer-songwriter Dan Sultan releases ‘Love & Hate’ – a rendition of Michael Kiwanuka’s original hit first released in 2016 – as the lead single from his highly anticipated album Aviary Takes, due for release on March 15