Crooked Thieves - Dancing in the Crowd 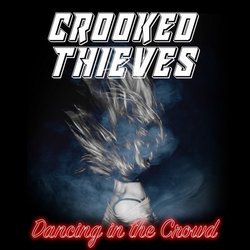 Crooked Thieves is a hard rock band from Melbourne, Australia.

Moving in the same circles but never crossing paths, it was at a Violent Soho gig in a living room in West End, Brisbane when lead vocalist Shane Jamieson and bass guitarist Emma Friday met for the first time. It was on that evening in late Spring of 2011 that they decided to combine forces.

Since their humble beginnings, the duo have embarked on a creative journey, cutting their teeth on the local Brisbane scene and refining their songwriting prowess.

Drawn to Melbourne by its vibrant music scene, the pair packed their bags and made the move down south, forming Crooked Thieves in 2017. Backed up by their live band, Crooked Thieves packs a punch with their energetic shows.

Through their dynamic fusion of high-octane vocals and drilling, heavy riffs, Jamieson and Friday have redefined themselves as an emerging heavy music powerhouse, using a number of influences from the hard rock, grunge and heavy metal genres.

From Metallica and Black Sabbath to Silverchair and INXS, the pair have channelled their influences to produce what is destined to become one of Melbourne’s most unique sounding rock bands.


Dancing in the Crowd utilises several timeless tropes that are often associated with alternative rock. The song is heavily based around an attention grabbing fuzzy guitar riff, which introduces the song before the whole band kicks into full gear. Also present is the element of Quiet/Loud, the music and vocals range from a quiet whisper to a gravely roar.