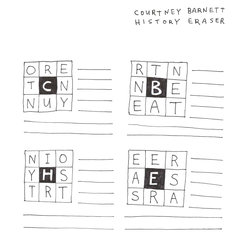 Courtney Barnett lives in Melbourne, plays guitar and writes songs. Courtney recorded her debut EP "I’ve got a friend called Emily Ferris" late 2011 and it's lead track "Lance Jr" has had great success on radio, especially 3RRR, PBS & Triple J, which Courtney reckons “is funny, because it doesn’t even have a chorus”.

History Eraser is her new song, she says it's “like a cross between Dylan’s 115th dream and Dig! Lazarus Dig“. Also, Mess And Noise said "Single of the year? It's up there"

Dan Luscombe guests on the song playing Guitar and Mellotron.