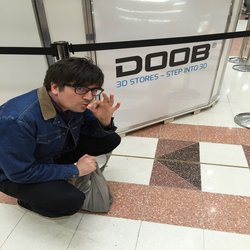 Conrad Greenleaf is probably better known as a member of Sydney psych-pop band Richard In Your Mind but he also makes his own excellent music.

In 1999 as a high school kid Conrad self released a home made dance album 'Straight Outta Leichhardt' which was played on FBi radio back when it used to be broadcast out of the Marlborough Hotel. Since then he has released a lo-fi pop album (2015's Modern Emotions), an album of ambient electronic music (2017's Shimmering Twins) and produced and collaborated with other artists such as Spod, Seja, ROMI! and Richard Cuthbert.


Smoke Weed Occasionally is a fun little rap song released to celebrate 4/20 aka Marijuana Day. There is a rhyme in the 2nd verse that has been described as the greatest rhyme of all time.

Other tracks by Conrad Greenleaf: Conrad's Back  -  Black Flowers
%