Columbus - Can't Hide From What Hurts 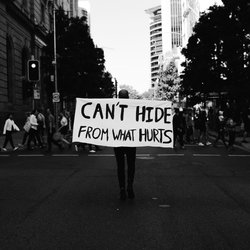 Playing earnest and relatable rock ballads, Australian trio Columbus have established themselves a force to be reckoned with, both internationally and abroad.

Having spent the past 5 years touring Australia and the UK, Columbus first broke through via Triple J Unearthed and Soundwave Festival.

Their debut LP 'Spring Forever' peaked at 47 on the ARIA charts seeing them tour Australia with Birds Of Tokyo, In Hearts Wake, You Me At Six & Trophy Eyes whilst also conquering festivals NYE On The Hill & UNIFY.

The final tour for the 'Spring Forever' cycle was capped off with sold-out headline shows in Brisbane, Sydney and Melbourne.

Their second LP 'A Hot Take On Heartbreak' was released with critical acclaim, scoring 9/10 via Depth Magazine and 10/10 via Hysteria Magazine. Columbus headed out on on the road with William Ryan Key of US giants 'Yellowcard' before completing an Australian wide headline run.


"‘Can’t Hide From What Hurts’ represents the past 12 months of the band and all of us making it out stronger than ever. You can’t mask how you feel and expect to grow. It takes strength to confront how you feel and use that to move forward and improve." - Daniel