Chase City - Back In Motion 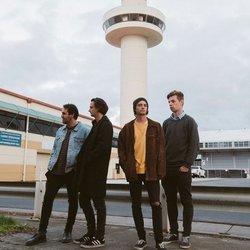 Tasmania's hardest working dance starters, Chase City are back to drop one more single before the clock strikes 2020. "Back In Motion" follows on from where last single "Temptation" left off, heavy synths, catchy vocals and they're wrapping up the year with shows supporting Lime Cordiale alongside a headlining show in Melbourne!"We tracked this song at our home studio in Hobart. We wrote, and recorded it pretty much in one week as it just came together really well. Initially the idea was just something Tarik was playing around with trying to get some really dark clubby sounds with side chained synths etc. This just sounded cool to us instantly and it was a matter of turning into something we could use. Once we had a solid thing going we just jammed it for hours until we really had something to work with."


We really tried to include our usual guitar hooks but they just weren't fitting and we were happy to take a really electronic approach to this. We had just watched the latest trainspotting film before recording the song and we just wanted the production to feel like a song that could fit into a soundtrack like that.