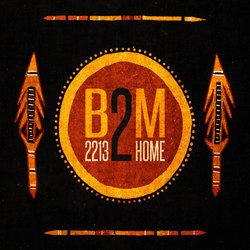 B2M (Bathurst to Melville) is a seven-piece band from the Tiwi Islands, 80km north of Darwin, where the Arafura Sea meets the Timor Sea in the Northern Territory. Formed in late December 2004 B2M are strong Tiwi men who write, sing and perform music about the issues we all face.

B2M is Tiwi R‘n’B, and their first album “Home” is unique and infectious. Beats, chants and harmonies fill this debut.

B2M have already accomplished what takes some bands a lifetime to achieve – role model status in their community and ambassadors to a broader Australian and international community – as they carry a positive image of their people and culture through their R’n’B music with a unique Tiwi twist.

As well as standout performances throughout WA and the NT, in China, East Timor and on stage with Tina Arena, the Pigram Brothers and Busby Marou, B2M’s community work has not gone unnoticed as B2M were shortlisted for Band of the Year at the prestigious 2012 Deadly Awards – an amazing achievement without having produced a debut album!


A party song encouraging everyone to get up, dance and have fun.