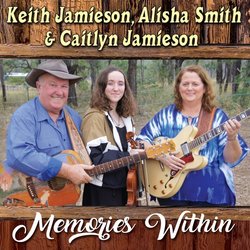 Alisha started out on rhythm and bass guitar in around 1998 and was very fortunate to have Barry Thornton teach her a few licks and tricks along the way. Over the years Alisha has developed her own style but is keeping alive the bush ballad sound.

Alisha has toured right around Australia four times with her partner Keith Jamieson and their daughter Caitlyn. They perform all over the country at festivals, pubs, clubs and old time country halls, also doing regular tours from Queensland right down through the southern states and into South Australia.

She has been nominated for a few awards over the years including being in the finals of the Golden Guitar Awards in 2008 with Charley Boyter for “Tanami Track”. She won the Tasmania/NZ Best Instrumental Album in 2005 with “Guitar Pickin’ Chicken”. Alisha was very honoured to be awarded the Barry Thornton Memorial Award at Bungendore in 2005 and was also nominated in the finals of the TIARA Awards the same year. In 2014 Alisha won the Instrumental Section at the Bungendore Awards with a Terry Bennetts song called “Rabbit Flat Polka”.


'Keeroongooloo Station' was written by Slim Dusty and Kelly & Marion Dixon. This has always been one of Alisha's most loved Slim songs so she decided to record an instrumental version whilst Caitlyn has played some great fiddle. Kelly Dixon was excited to hear the instrumental version of it as it hadn’t been done before.