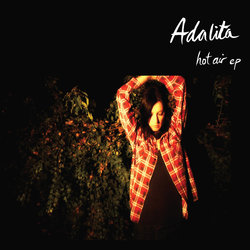 If you know anything at all about Australian music, of course, you already know who Adalita is. You know her from Magic Dirt, who for nearly two decades have been one of Australia’s most respected and influential bands. You may have grown up with her music, watching it evolve from the freeform distortion-drenched darkness of the early ‘90s to the confident, poised rock’n’roll of ‘Girl’. Or you might be a new fan, just beginning to explore the work of one of Australia’s greatest contemporary bands.

But either way, you’ve never heard her sound quite like this. ‘Adalita’ is her first solo record, a collection of ten songs that captures her at her most raw and unaffected. It showcases the breadth of her songwriting talents, from the quiet introspection of songs like Perfection and The Repairer through the more rocking Jewel Thief and Goin Down. The music isn’t so much a radical departure from Magic Dirt as it is a distillation of everything that band represents.

“Minimal”, “beautiful”, “haunting”… They’re certainly all adjectives that apply to an album that further demonstrates Adalita’s status as one of the great Australian songwriters and vocalists of the last couple of decades.

The Repairer is the follow up single to Hot Air which set the mood and ignited strong anticipation for the album. ‘Adalita’ is one of the best solo debuts of recent times. It’s already one of the best albums of the year.


Other tracks by Adalita: Hot Air  -  Fool Around
%