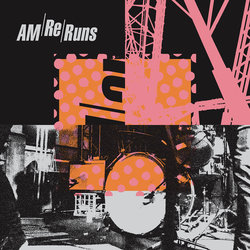 AM Reruns are a three-piece rock'n'roll group from Melbourne. They formed in December 2016 as Lip Sync Chicks, fronted by guitarist and singer Andy Campbell (best known for his post-punk guitar parts on Jim Lawrie's acclaimed 2017 LP "Slacker Of The Year"), with Daniel Parsons-Jones on bass guitar and harmony vocals, and drummer Pamela Zaharias. Under the influence of new-wave and indie icons Johnny Marr, Blondie and Magazine, the band arrived at a lean, stylish brand of guitar music with classic mod intros and songs structured like the American rock'n'roll 7"s of the early 1960s. Anti-psychedelia, repelled by prog and bored to hell with improvisation, AM Reruns' sound is idiosyncratically theirs, seamlessly combining the energy of '70s LA punk rock with the drama of Northern England indie.

Their debut 7" Looking For A Victim b/w Bring That Boy Back was included in Erica Dunn's 'Best of 2018' rundown on PBS FM. Kicking off 2019, the band received airplay on cult L.A. show 'Go Deep With Bruce Rave' and welcomed drummer Shauna Boyle into the fold (from Melbourne post-punk group Cable Ties)

AM Reruns eponymous debut LP (Independent) will be released digitally on 9 August and on vinyl from 23 August.


"Vicious" is a three-minute proto-punk tyre fire, fuelled by the clear-headedness that follows saying goodbye to a narcissistic companion. The track takes inspiration from the escapist teenage dramas Buffy The Vampire Slayer and The O.C., and the masterful midnight riffage of Patti Smith Group's Ivan Kral and The Stooges' James Williamson.

Other tracks by AM Reruns: Slow Learner  -  Campaign Against Moral Persecution
%