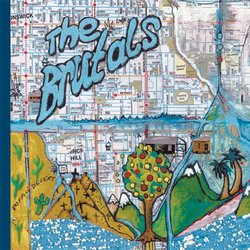 A while ago two friendly local street scruffians Bjenny Montero and Emmett 'Tropical Snake' Smith formed a jangling folk-rock band by the name of Treetops who went on to a short period of rapid success and equally rapid obscurity. Releasing three critically acclaimed EPs, touring the country numerous times and breaking up and reforming to explore the outer limits of space rock, the group once again fell apart to the usual cliches of onstage fist fights, artistic similarities and near obsessive merry making.

After a decent hiatus, acoustic guitars were spotted once again at various stages of the night jangling chords back and forth around rolling and scribbled verses, kicked into shape middle eights and age-old misguided romantic lyrical advice. From this vantage point, the name of 'The Brutals’ was decided as a suitable new bag handle for catching the late night buzzing, fuzzy song writing and fumbling-with-the-record-button-on-the-tape-deck sessions.

Other tracks by the Brutals: Goldilocks  -  Jeneane Jeneane
%