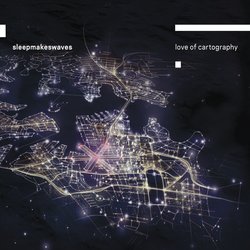 Love Of Cartography is the second ARIA-nominated album from Sydney ambient/melodic post-rockers sleepmakeswaves.

Following their ARIA-nominated debut …and so we destroyed everything, the band have created their most epic, intricate and powerful record to date. Love Of Cartography showcases their dynamic and energetic approach to modern post-rock, whilst retaining their signature melodic hooks.

With a series of memorable and thundering sequences, the album presents the band’s continued desire to map new creative directions within an instrumental rock framework.

The band’s heavy touring schedule of the past three years (sharing stages with 65daysofstatic & Karnivool) has honed their powerful live energy, which has been captured impressively on the album.

Recorded in Byron Bay at Studio 301 with producer Nick DiDia (Karnivool, Pearl Jam, Stone Temple Pilots, Powderfinger, Rage Against The Machine), the album’s 10 tracks range from the epic bombast of ‘Perfect Detonator’ to the delicate and subtle electronic flourishes of ‘A Little Spark.’ Key tracks ‘Something Like Avalanches’ and ‘Great Northern’ have already been featured on triple j rotation and community & college radio both at home and abroad.

With extensive touring planned for Australia, Europe, the UK and Asia ahead, the future looks bright for this trailblazing Sydney group.

The driving melodic epic ‘Great Northern’ is a dramatic and rhythmic take on the band’s energetic instrumentals, featuring memorable hooks and a balance of electronic ambience and rock drive.

The video directed by Bradley Coombs features a skyward-driven protagonist.