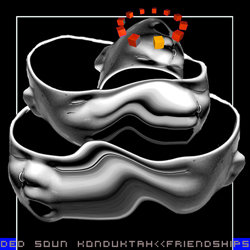 Bonded by a love of tough beats and mind altering visuals, friendships works with both installation and performance to envelop audiences.

Nic grew up on the land in remote Western Australia. Music as a commodity was rare. Feeling constantly on the cultural back­foot, his quest culminated in a trek across the Nullarbor and landed him in Melbourne.

Misha is a Melbourne local. After learning to draw at a young age she discovered a talent for painting early and set her sights on studying art. Inspired by the pace and grit of the city.

A mutual friend brought Nic to Misha’s show and what began as a potential commission for cover art became something neither one could have predicted. Matched by their artistic flair and penchant to boogie they discovered a new way to push their respective boundaries. The result was friendships: Nic’s beats and Misha’s imagery forming music that gives as much credit to the visual as the sonic.

A few years on and friendships are running unchallenged; touring the USA and supporting acts such as Cashmere Cat, Mark Pritchard and Erykah Badu.