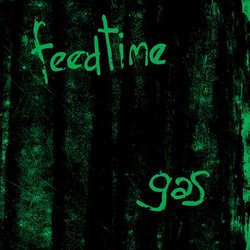 Sydney, 1978-79. Against the backdrop of the burgeoning inner city music scene, feedtime was formed. Taking notes from the incendiary live shows of X and Rose Tattoo, feedtime set about creating their own interpretation of the events unfolding before them, a blues-noise that was equal parts abstract minimalism and working class roots-rock. Post-punk, yet right in the thick of it; miles ahead of the pack and not many seemed to notice.
The classic line up of feedtime (reunited here on ‘Gas’) released 4 albums in the 1980’s before their initial dissolution in 1989. All albums were licensed in the US, UK and Europe which generated the band an international cult following, and often cited as influential in the US regional band explosion of the early ‘90s. Fitting then, that in 2012 the band’s 4 classic albums were reissued as a box set by Sub Pop Records.
‘Gas’ presents all the elements which make feedtime one of the great Australian bands. The staggering, woozy slide guitar; the thundering drums and the relentless thrum of the bass create the atmosphere of urban panic up against finding ways to smile amongst the bitter, harsh reality of life. Some make it through, some don’t.


A blues-noise that was equal parts abstract minimalism and working class roots-rock. Post-punk, yet right in the thick of it; miles ahead of the pack.