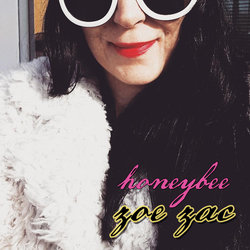 The Honeybee Tour see's  Zoe Zac and band travel to play shows around Europe  as well as recording new works in Berlin October 2015.

Since playing her  first solo gig 13 years ago ​​supporting John Butler at Tasmania's Fungaia Festival 2002. Zoe ​Z​ac ​​ has played solo as well as being ​songwriter/singer guitarist for her bands We are the Kicks and ​​The Mincers​.​ Release's  include We are The Kicks - Ladders ( Produced by the OUTsiDER 2007 ) and  The Mincers -Meet the Mincers (Produced by Kramer 2011).

Other tracks by Zoe Zac: Honeybee  -  As The Smog Rolls In From China
%