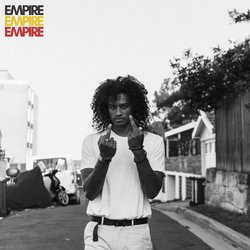 Touted by triple j Unearthed as "One To Watch" in 2017, this West Australian hip hop artist Ziggy Ramo is already making serious waves. Championed by Briggs and Remi, influenced by Common and Mos Def, he blends laid-back old school production with a smart, silky flow to dazzling effect.

On powerful songs like 'Black Face' and 'Black Thoughts', he tackles racism and indigenous inequality head on while 'Same Script' takes an honest look at self-doubt and mental health. Last year, triple j premiered his latest jam 'YKWD' which is a dancefloor ode to the memory Elijah Doherty "for all the dances he'll never have" and is the track associated with one of the most talked about moments from Ziggy's highly praised BIGSOUND 2017 appearance.

After a stack of touring in 2018, Ziggy is back, with his new single "Empire" speaking volumes on some of the most important and relevant issues facing our country.

Ziggy said “F&*k Australia Day. We survived, now we thrive. I’m not going to carry the emotional burden this weekend or waste my time getting into arguments with brick walls. I’ve been holding onto Empire for years but I woke up this morning feeling proud to be Indigenous."