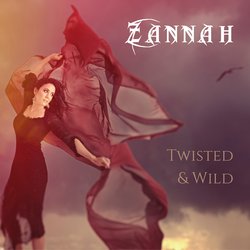 Although this is Zannah’s debut release, she is no newcomer to performing or composing. Over the last ten years, she has performed in various bands that covered various styles of contemporary music. In that time she has performed at notable venues around Australia including the Brisbane Festival, Brisbane Powerhouse, Brisbane Cabaret Festival, City sounds, BEMAC events and Easterfest.

Having marvelled at the ability to manipulate and shape sounds with the voice from a young age and then being exposed and trained in Western Classical music throughout her formative years, Zannah draws from her life experiences, travelling and her Colombian heritage. Ultimately, this is reflected significantly in her musical style that spans across Persian, Flamenco and Irish vocal styles.

In this modern and bold take on this contemporary world genre, Zannah's sound transforms from a sparse, calming, percussion heavy introduction, to an explosive outlay from the string section, drums, distorted electric guitar and of course, her vocals.

Zannah is no doubt debuting with one of her harder hitting tracks but does so with such a tasteful fashion that it remains appealing to an audience that is both mature and youthful. Her debut EP is set to be released in April 2018.


‘Twisted and Wild’ is an explosive and intense number that showcases Zannah's evocative Persian-style vocals, composition and instrumentation. Much like the rise of dynamics in the track, ‘Twisted and Wild’ is about unleashing anger, seeking truth and finding strength while rising out of a difficult situation.