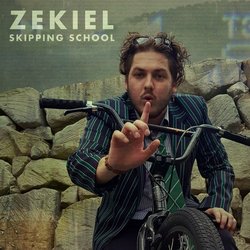 Growing up in the Queensland town of Mackay, 23-year-old ZEKIEL is one of six children. Moving to Brisbane at 18, ZEKIEL flexed his newfound passion for writing and performing, while working hard independently promoting his music, before the hustle saw him move to Sydney in 2019.

Quickly building a network of talented next-generation artists around him, ZEKIEL puts a particular emphasis on collaboration, and championing the success of those around him. It’s something he believes that makes this new generation of musicians unique. Instead of viewing each other as competition in this cut-throat industry, they work collaboratively on each other’s projects.

Since moving to Sydney he’s worked with the likes of Thelma Plum, Cosmo’s Midnight, Yorke, Ned Houston, Jack Gray and Cyrus - as well as working as a topliner and guest writer.


Opening with modulated vocals and subtle splashes of swirling synths, ‘Skipping School’ gradually builds with its steadfast bass and beats, before the commanding cadences and mesmerising melodies of ZEKIEL soar effortlessly above. ZEKIEL describes ‘Skipping School’ as a metaphor for when someone is too cool, or thinks they’re too cool, for you.