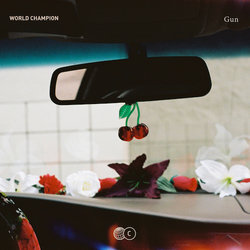 Campion and Sudek originally formed the band after bonding over their love for psych-pop and electronica. Julian was a founding member of Mercy Arms and has since played with Canyons, FLRL (Jono Ma, Kirin J Callinan) and most recently George Maple & Bag Raiders. Will Campion has both been a bedroom producer, and alongside local Sydney musician Bus Vipers formed indie outfit The Chevaliers. World Champion started as a studio beast; a patchwork of ideas and jams that they’d individually been sitting on for years.

World Champion quickly shot to critical acclaim with their debut EP Avocado Galaxy (2015) and the lively track of the same name, that was dubbed by Noisey as “zingy synth-pop at its finest". Gaining rotation across Triple J, FBi Radio and BBC 1, the EP set the tone for the band’s electrifying live show, which inspired fans to tattoo themselves with avocado galaxies and saw the band play at some of Australia's biggest festivals including Splendour in the Grass, Lost Paradise, Mountain Sounds, Groovin' the Moo and Volumes alongside boutique events in between. Having toured alongside Toro Y Moi, Chkchkchk!, Jagwar Ma and Parcels, the trio now gear up to drop their latest single.


“Gun" kicks off with crisp rolling snare hits, playful bass strums and fuzzy echo-laden synths, deep diving into a body-moving realm you’ll love to lose yourself in. The track re-imagines timeless themes of motown with a modern sonic touch. Completed with velvety vocals, “Gun” will take you beachside in a quintessential Australian summer for a moment of technicolour serenity.